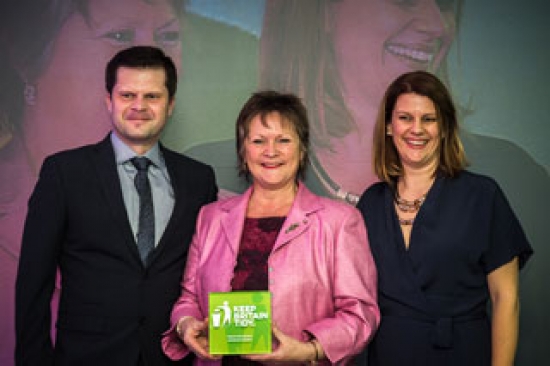 Hounslow Highways wins team of the year at KBT Awards

Hounslow Highways was awarded the Team of the Year award at the Keep Britain Tidy Awards last month.

Hounslow Highways was commended for its engagement work with the community, providing advice and education to businesses and schools and taking enforcement action against people who litter the borough’s streets.

By hosting weekly Joint Action Days with the Metropolitan Police, Hounslow Highways has developed an ongoing fight against environmental offences, issuing over 1,500 fines in the last 3 years. A number of campaigns and initiatives have also contributed to enforcement activities against more specific offences including chewing gum littering and fly-tipping bulky waste such as mattresses.

The team was also praised for the regular auditing of their own cleansing activities, ensuring standards are met across the borough. The inspection data gathered by Hounslow Highways is fed back into a central system, which is used to inform cleansing frequencies and where resource is allocated, ensuring a better service for residents.

Hounslow Highways Divisional Director, Martin Clack, said: “This is a tremendous accomplishment for our business, particularly following our Quality Improvement Award at last year’s KBT awards. We continue to recognise that there are always improvements to be made with street cleansing and we will use these successes to innovate and advance this area of our service.”

Engagement and enforcement activities continue this year, with a fly-tipping trial to reduce dumped bags of domestic waste already in motion. Hounslow Highways continues to engage with schools, by supporting the Metropolitan Police’s Junior Citizen scheme for the third year running, where a scenario is hosted by Hounslow Highways to 3,000 Hounslow pupils encouraging environmentally responsible behaviours.