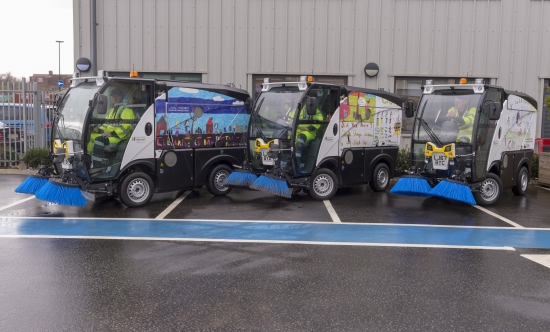 The 3 subcompact Johnston 101 and 3 compact Scarab sweepers will join the existing sweeper fleet as part of a huge £500k investment that Hounslow Highways has made in keeping the borough roads and streets cleaner. The new fleet has been specifically chosen to meet the demanding urban environment in Hounslow with heavily parked vehicles and high traffic levels.

The unveiling of the fleet coincided with the presentation to the winners of a competition run with the schools in the borough. Students from local primary schools were asked to take part in a competition to design an anti-litter/fly tipping poster. The winning designs are featured on the 6 new vehicles.

Martin Clack, Divisional Director at Hounslow Highways, said: “Ringway Hounslow Highways are very grateful to all of the schools who took part in this Environmental Art competition. The designs that were submitted by the Boroughs’ school children were of a high standard and the winning entries convey a strong anti-litter message. This initiative builds upon our community engagement, behavioural education, and enforcement activities.

Our commitment to improving Environmental standards across Hounslow is reinforced by the £500,000 investment in the 6 new mechanical sweepers which will enable opportunities for new ways of working, and innovative solutions to the challenges presented by increased fly tipping of domestic waste.”

The sweepers were unveiled at Hounslow Highways’ Jubilee House depot on Tuesday afternoon when guests included the leader of London Borough of Hounslow, Councillor Steve Curran.

He said: “There were so many fantastic entries from the school children of Hounslow to the competition that it was difficult to pick just six winners. I had the opportunity to meet the winners whose artwork has been transposed onto the new sweepers. All six look brilliant. The artwork is very eye-catching and gives a clear message of the importance of recycling and not littering. I’m sure the investment in the new sweepers will help ensure we can all enjoy living in a cleaner and tidier borough for many years to come.”

The winning schools will receive iPads and all six students whose entries were selected to be displayed on the sweepers received a book voucher for £25 along and a goodie bag including merchandise from sweeper manufacturers Scarab and Johnston.