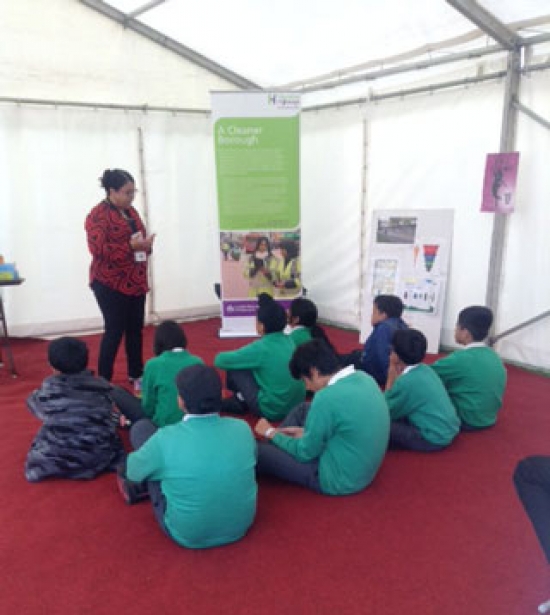 The scheme ran for two weeks to educate 3,000 of Hounslow’s students in becoming better citizens. As well as helping setup a secure site, provision of equipment and emergency support during heavy rainfall, Hounslow presented a “Love Where You Live” scenario to educate pupils on the impact of littering on the environment.

Pupils from over 30 Hounslow primary schools attended the scenario which emphasised the importance of keeping their environment and the streets clean and the associated penalties and fines for littering. A section of the scenario highlighted this through a roleplay where a Hounslow Highways officer issued an £80 fine to an adult found dropping tissue on the floor.

The scenario also highlighted the negative impacts of dropping chewing gum and spraying graffiti. Gum wrappers were distributed to pupils to help remind them of the correct methods of disposal.

Hounslow Highways Divisional Director, Martin Clack, said: “We were very pleased to be lead sponsors for a second year running and work with the police and Cranford Community College on this event. With more pupils attending, we were able to build on our ongoing civic pride campaign in building an environmentally responsible future generation. The police did a fantastic job and we were grateful to be part of such an important event.”

In addition to hosting a scenario, Hounslow Highways provided litter bins and bags, cones and barriers to assist the police with operations. Bins were emptied the end of each day by Hounslow Highways’ cleansing crews.

PC Michael Purvey said: “We were grateful for the support provided by Hounslow Highways during Junior Citizen, particularly when their crews helped clear and dry the site following heavy rainfall in the second week. Thankfully, with our combined efforts, we were up and running the following day.”

Hounslow’s Junior Citizen Scheme is run by the Hounslow Metropolitan Police and is open to all primary schools in the borough.