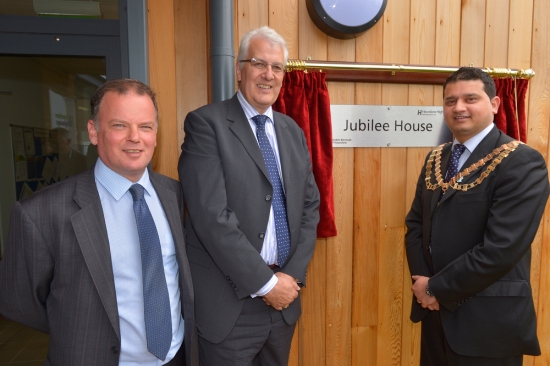 The new Hounslow Highways depot and office were officially opened by the Mayor of Hounslow, Councillor Sachin Gupta, on Friday 21 June 2013.

Attended by approximately 40 invited guests, the opening celebrated the fact that Hounslow Highways office-based and operations staff are together in one location for the first time. This brings significant benefits to the services being provided.

Welcoming the guests, Phil Jackson (pictured middle), VINCI Concessions, explained that the depot and new office building in Bridge Road had been very much an integral part of the bid.

Rob Gillespie (pictured left), Hounslow Highways Service Director, presented guests with an overview of the achievements in the project so far, highlighting that over 34km of roads, 36km of footways and 1,776 street lights had been completed in the first six months of the project alone.

Unveiling the plaque, the Mayor of Hounslow (pictured right) said: “This state-of-the-art, high quality building will help staff members deliver a state-of-the-art, high quality street service to residents. I personally know the importance of clean and safe streets and the benefits these bring. Although it is a huge responsibility delivering this important service on behalf of the local authority, everyone involved has the full support of the council.”

Rob Gillespie added: “It was always our aim to offer a long-term legacy and hand something back at the end of the 25-year project to the London Borough of Hounslow. I am extremely pleased that all Hounslow Highways staff members are now together in one base. At the end of the day, a service is about people and teams who are motivated by their surroundings and that this has a positive effect on the overall business and service we provide.”

Following the unveiling, guests were given a tour of the new building and depot where they could see for themselves the open plan office spaces, communications hub, sizeable meeting rooms, refreshment points and reflection room. The depot has been transformed so that traffic can flow freely and the office building designed to be environmentally friendly and in keeping with the surrounding streets.