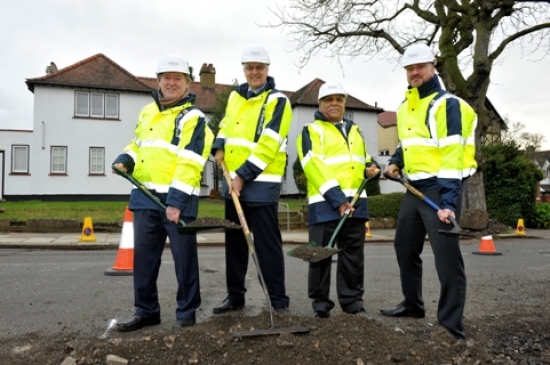 The first Hounslow Highways carriageway works took place at the junction of Ridgeway Road and College Road in Isleworth.

Hounslow Highways, a partnership between the London Borough of Hounslow, VINCI Concessions, Barclays Infrastructure Funds, and Ringway, officially took on the responsibility for the borough’s roads on the 1 January 2013. The organisation will deliver a range of services to improve Hounslow’s streets over the next 25 years.

These will include resurfacing and improving the 259 miles of roads and 458 miles of footpaths in the borough; replacing over 16,000 street lights in Hounslow with brighter, more environmentally friendly LED lights; installing new litter bins and deploying new, state-of-the-art street cleaning equipment.

Cllr Jagdish Sharma, Leader of the Council, said: “It’s great to be getting stuck in with the new service which will substantially improve the streets of Hounslow. Hounslow residents and businesses deserve high quality, smooth, clean streets and that is what will be delivered through Hounslow Highways.”

Cllr Colin Ellar, Deputy Leader of the Council, added: “I’m very pleased to be involved with this project, the first of many improvements to our streets. I know that the people of Hounslow will be very pleased with the better lights and roads that are planned for the borough.”

Phil Jackson, CEO Hounslow Highways Services, said: “This is a historic day for Hounslow and one we’re very proud to be part of. The investment we will be making and the works we complete are all geared towards building a better borough and in turn, attracting new businesses and visitors and aiding economic development.”

Greg Carstensen, Hounslow Highways Service Director, added: “The commencement of this contract is a truly exciting time. As exciting as it is to deliver a massive investment into the infrastructure of Hounslow, at the same time, we are fully aware of our obligation to deliver a high quality highways service to all our customers. We are looking forward to the challenges ahead, working in partnership with the borough to realise the benefits of this contract as well as support the borough in its aspirations in respect of the regeneration of Hounslow. We are delighted to be a part of all this.”