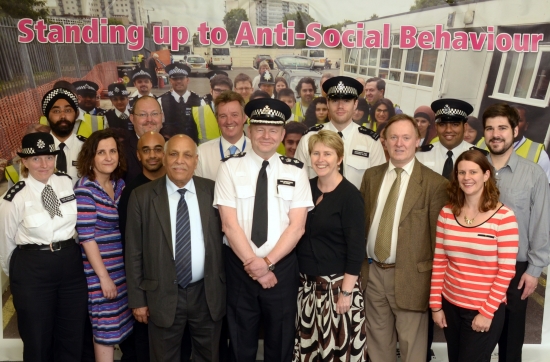 Standing up to anti-social behaviour

Launched on 1 July 2013, it will mark a series of police-led operations over the next 13 weeks which will target a range of anti-social activities including littering, graffiti, street prostitution and drug abuse in Hounslow.

The summer campaign kicked off with the introduction of a six-month Dispersal Order in the Convent Way / Ringway area of Heston today. This means the police can ask people in a group of more than two, who they believe are causing a nuisance, to move on and not return to the area within 24 hours.

The summer initiative will also feature additional estate police officers patrolling the borough’s housing estates from mid-July, plus a roll-out of new litter-bins and enforcement action against litter louts. As part of the campaign, three priorities have been identified following local consultation across the borough’s four policing areas. Residents’ priorities are littering and fly-tipping, drunkenness and street drinking and inconsiderate vehicle use.

Rebecca Mastrogiannis, Environmental Services and Sustainability Manager from Hounslow Highways said: “We have a big part to play in helping to keep the borough’s streets clean and safe, and we are very happy to be part of this campaign, making Hounslow a better place to live.”

Councillor Jagdish Sharma, Leader of Hounslow Council, said: “Anti-social behaviour is a top priority for residents, the police, the council, housing providers and other partners, and we hope that this joint action will raise confidence that Hounslow is a safe place to for people to live and work.”