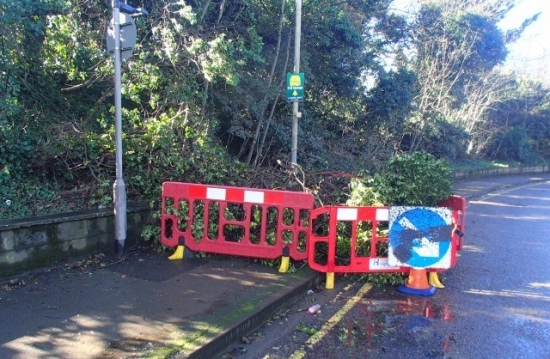 Hounslow Highways crews worked through the weekend to keep the roads safe and free from obstruction following the storm that lasted from Friday evening through to late Saturday morning.

The severe weather, that produced wind gusts of up to 65mph, resulted in 36 priority incidents in Hounslow that required an emergency response. The incidents ranged from trees that had fallen down, large limbs or branches hanging dangerously and a number of brick walls that had either fallen over or been knocked down by falling trees and debris.

Each incident was a potential hazard as it could pose a risk to persons or property so Hounslow Highways’ first order was to attend and barrier off the area before being removed from the network as fast as possible.

Over a third of the incidents that Hounslow Highways responded to were trees from private property which had fallen onto or posed a risk to the Highway.  In such instances Hounslow Highways will respond and remove the tree if necessary but homeowners are responsible for trees within their properties. Residents are encouraged to ensure that trees on their properties are regularly inspected to ensure they are safe and healthy.

Hounslow Highways Service Director Rob Gillespie said: “We thank residents for reporting fallen trees and branches to us and would like to assure them that we are dealing with these incidents and reducing the possibility of a tree falling through a rigorous inspection regime to identify at-risk trees and remedy them in advance.”

“This is the third big storm event we’ve had in four months and we continue to work to keep the roads as safe as possible when severe weather hits.”

Councillor Colin Ellar, deputy leader of Hounslow Council, said: “Once again Hounslow Highways has effectively dealt with the impact of Friday’s storm as they did the last time the borough was hit hard by high winds.  They were well prepared and did a sound, professional job.”