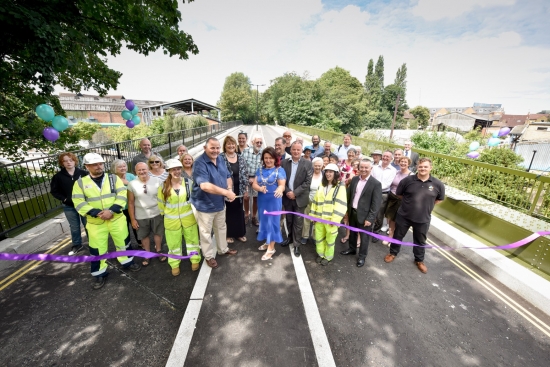 An opening ceremony to mark the opening of Augustus Close Bridge was led by Leader of Hounslow Council, Councillor Steve Curran, on Saturday 8th July 2017.

During the ceremony, Councillor Curran cut the ceremonial ribbon and unveiled the bridge’s new plaque to the crowd, which included the Mayor of Hounslow, Councillor Sue Sampson, councillors from across Hounslow borough, the Hounslow Highways Project Managers who oversaw the refurbishment, and residents of Brentford Dock.

Commissioned by the London Borough of Hounslow, Hounslow Highways started the £1.76m scheme in August 2016. Sited on a backwater of the River Brent by the Thames, the bridge is said to be the last railway project by the famous engineer Isambard Brunel. Before refurbishment works started, the bridge was in a poor condition, was subject to a 7.5 tonne weight restriction and had a chicane in place to limit loading, which slowed traffic and proved unpopular with local residents. The refurbishment of the bridge, which completed in May 2017, became the largest structural improvement scheme for Hounslow Highways, and resulted in the bridge’s structure being strengthened to a 40 tonne capacity.

Hounslow Highways Project Manager, Louise Batts, who delivered the project, supported by Graduate Engineer, Katie Letheren, kept a part of the bridge’s history by framing rivets from the bridge’s original structure (which had to be removed during works). The rivets were presented to all parties who were either involved in the refurbishment or helped with their cooperation during works, including Brentford Dock’s Residents Association.

“We’re really proud of the restoration work we’ve done on this bridge. Not only has the scheme improved the local environment and traffic, but it also brought back to life a local historical landmark. It’s an honour for Hounslow Highways to be a part of that.”