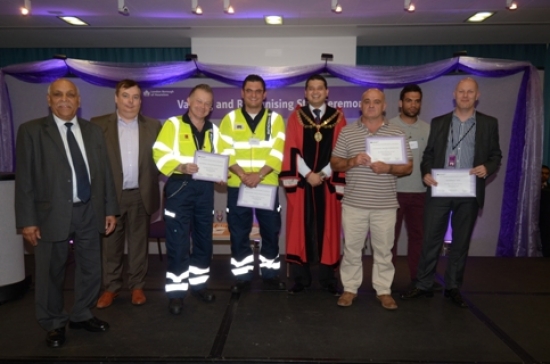 Rosario Ciccarelli and John Tomlinson who both work in and around Craven Avenue in Feltham, collected their awards at the official ceremony which took place on Thursday 27 June at the Civic Centre in Hounslow.

Wayne Hayler, also from the Street Cleaning Team and works in and around Granville Avenue in Feltham, was highly commended in the same category and received a certificate.

The awards are extra special as nominations are made by the public to recognise those who had delivered excellent customer service. Members of the public can nominate on the council’s website, magazine or via forms distributed to customer service points across the borough.

The category itself resulted in 161 nominations and the finalists (winner, highly commended and commended) were chosen by a staff panel.

At the same ceremony, a further 16 Hounslow Highways staff members were awarded the ‘Loyal Service Award’ for lengths of service ranging from 10 to 30 years. These include: Lorraine Srivastav, Pat Silva, Mark Keywood, Terence Watts and Wayne Hayler.

The ceremony was hosted by The Mayor, the leader of the Council and Chief Executive and included entertainment and light refreshments.