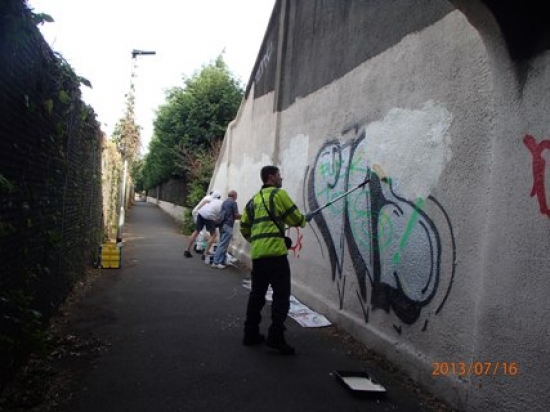 Hounslow Highways is taking a stance on anti-social behaviour by hosting community clean-up days to combat littering and graffiti hotspots in the borough. Members of the Community Environment Team visited Barnes Passage in Chiswick on 16 July to paint over unsightly graffiti, clean-up weeds and overgrown vegetation and generally clean the area.

Nine Hounslow Highways staff members, both office-based and operational, were involved in the facelift. The operation, which took about four hours, included the painting over of 130 pieces of graffiti.

Hounslow Highways Community Environment Manager, Lorraine Srivastav, said: “The Barnes Passage clean-up day was a huge success. Barnes Passage is a well-used footpath in Chiswick and links Burlington Road to Barnes Bridge. The team from Hounslow Highways wanted to actively do something for the community as the graffiti along this footpath was unsightly and contributes to the perception of crime in the area. The team received a lot of positive comments from residents who were passing by and appreciated the hard work being put in by all.”

This project was also supported by the Safer Neighbourhood Team from Chiswick which has committed to supporting Hounslow Highways’ work in this area.

Chief Inspector Rob Weir, from Hounslow Police, said: “Environmental issues have been highlighted as a concern for residents, and the focused work to paint over unsightly graffiti in Barnes Passage has massively improved the image of this location. I am pleased that the Chiswick Neighbourhood officers were able to join colleagues from Hounslow Highways to achieve this improvement and I look forward to many further initiatives to improve the environment and residents’ quality of life in the coming weeks.”

Cllr Colin Ellar, Deputy Leader of Hounslow Council said: “We are determined to make our borough a cleaner, tidier place. As part of this mission we want to see Graffiti rubbed out in Hounslow.”

The Community Environment Team runs regular clean-up days throughout the borough and encourages residents to alert them to litter hotspots. To register your interest for a community clean-up day, please visit the Hounslow Highways contacts page.

“We have been working hard to engage with school children, residents and businesses in the borough to create a cleaner, safer environment in Hounslow and this initiative was a good way of leading by example and getting the job done successfully,” Lorraine added.