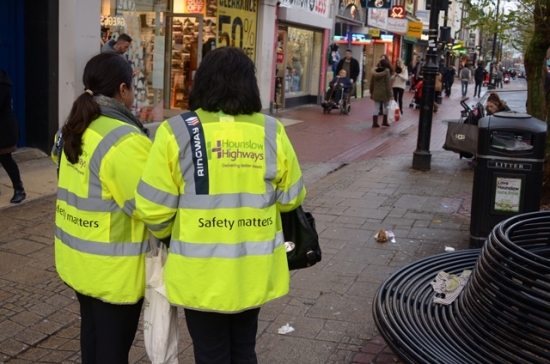 Five more litter louts were fined up to £80 each this week bringing a total of nine landed with a penalty since the council clamp down started last month.

A man, a woman and three businesses received their fines for littering during two days of enforcement. Monday saw the innovative Keep Britain Tidy ‘which side of the fence’ operation in Hounslow High Street and Tuesday was an action day in both Chiswick High Road and Hounslow High Street.

The ‘which side of the fence’ initiative meant Hounslow Highways stopped cleaning one side of Hounslow High Street to highlight the extent of litter which builds up during the day without street sweepers cleaning up.

Councillor Colin Ellar, deputy leader and cabinet member for environment, said: “Around £3 million a year is spent cleaning Hounslow’s streets so it’s only right these litterlouts pay the price for spoiling our streets and costing council taxpayers.  We decided to take a zero tolerance approach last month to make Hounslow among the cleanest boroughs in London and we will not let the inconsiderate few stop us reaching this goal.”

Hounslow Highways Service Director Rob Gillespie said: “Our officers continue to be out and about, educating residents and businesses about responsible waste disposal, however it is up to everyone to help keep the borough clean and the message is simple: don’t litter and you won’t be fined.”

The continuing litter clampdown will feature CCTV cameras being deployed in fly-tipping hot spots in the New Year. It will also run alongside an intensification of street cleaning by Hounslow Highways, including: