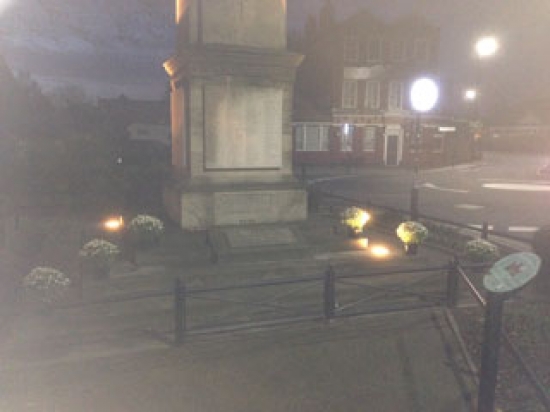 Scores of people gathered in Hounslow on 11 November to mark Armistice Day, remembering the borough’s war dead and praying for peace around the world.

Hounslow Mayor, Councillor Nisar Malik was joined by members of the Irish Guards, who moved into the Hounslow Barracks earlier in the year, veterans and the Brentford Army Cadet Force, for the remembrance service led by the Reverend Derek Simpson of St Paul’s Parish Church, Brentford. Veterans were joined by youngsters from Wellington Primary school, in Sutton Lane, Hounslow to lay wreaths of poppies.

The Armistice Day service is held annually to remember the eleventh hour of the eleventh month of 1918, when the horrors of the First World War were finally brought to a close. The congregation then observed two minutes’ of silence to give people the chance to remember the lives given up in armed conflict over the years, before the Last Post was sounded by a lone trumpeter.

Prior to Remembrance Sunday and Armistice Day, Hounslow Highways carried out additional cleaning of the borough’s war memorials. This year, Hounslow Highways also placed over 40 potted white Chrysanthemums at the memorials as a symbol of respect and peace.

Councillor Steve Curran, Leader of Hounslow Council, said: “It was good to see so many people wanting to pay tribute to the men and women who gave up their lives for their country during the two world wars and in the conflicts that have taken place since 1945.

“Armistice Day has grown into an international show of solidarity for the men and women currently serving their country and an appeal for international peace so that these terrible conflicts are not repeated.

“I’m very grateful to all those who were able to join us at the Civic Centre and to others who joined us in two minutes’ silence wherever they were around the borough at 11am.”