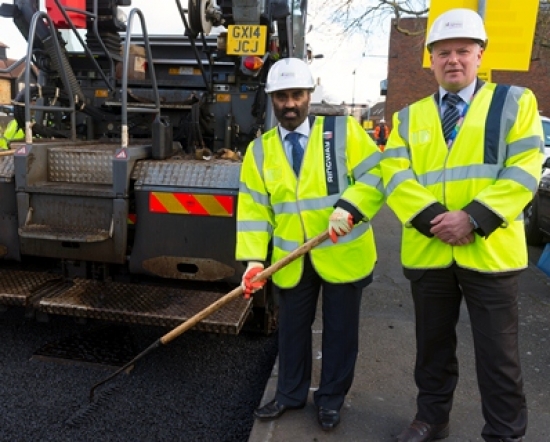 One million square metres of new road and pavement has been laid in Hounslow in little over two years.

Cllr Mann said: “We are just over two years into the project and this is a great milestone. With nearly three years remaining on the core investment period, there is still much to do across the borough, but I think most would agree that much of the borough has already been transformed for the better.”

Rob Gillespie said: “We are obviously delighted to be celebrating laying the 1,000,000m² of road and pavement surfacing in the borough, but appreciate we still have a lot of work to do. We have now completed 48 per cent of our programme and will continue in our efforts to improve the existing road and footway surfaces as part of the core investment period. I would also like to take this opportunity to thank residents and businesses for their understanding whilst the major work takes place.”

Hounslow Highways took over responsibility for the borough’s roads on the 1 January 2013. Delivering a range of services to improve Hounslow’s streets until 2038, works include resurfacing and improving the 259 miles of roads and 458 miles of footpaths, replacing the borough’s 16,000 street lights with brighter, more environmentally friendly LED (light emitting diode) lights and improving the overall street scene.